Effective support for people of Ukraine

The current war between Ukraine and Russia has severely strained international relations and increased the risk of a wider European conflict and worldwide tension. This war needs to be addressed by world leaders, institutes, organisations, and the public, each in their way. Our United Action gives way and platform to deserving nonprofits working hard to ease the adverse effects.

The war in Ukraine first erupted in early 2014. It continued as never-ending shellings and skirmishes along the front line that separates Russian- and  Ukrainian-controlled border regions in the east. On February 24, 2022, Russia launched a full-scale military invasion of Ukraine. The UN human rights chief stated that 406 civilian casualties have been confirmed in Ukraine, including 102 deaths, since the Russian attack started. "Most of these civilians were killed by explosive weapons with a wide impact area, including shelling from heavy artillery and multi-launch rocket systems, and airstrikes," she said, warning "the real figures are, I fear, [is] considerably higher". "Millions of civilians, including vulnerable and older people, are forced to huddle in different forms of bomb shelters, such as underground stations, to escape explosions," she continued. The attack also pushed tens of thousands of Ukrainians to flee to neighbouring countries. The current war has severely strained U.S.-Russia relations and increased the risk of a wider European conflict and worldwide tension. The effects of war are devastating for all civilians, and there are no winners on either side.

As the situation in Ukraine is actively evolving, so are the needs of citizens in the country and neighbouring regions. Many of us might feel helpless when confronted with geopolitical machinations of this scale, as such a war needs higher up political dialogue to be stopped and resolved. While waiting for peace via effective political talks and agreements, we can get involved in responses provided by nonprofits on the ground and globally that are actively helping people within Ukraine and refugees seeking safety elsewhere with medical and humanitarian aid. The aid includes providing food packages, emergency shelter, and health care services for those affected. Initiatives that promote peacebuilding actions such as nuclear security, arms control, and transparent military activities help with preventive measures and solutions.

In this United Action, you’ll find a tireless group of nonprofits participating in various aid and solutions varying from improving global policies, supporting Ukrainian newcomers or aiding in healthcare. We are currently putting all our efforts into evaluating the long list of charities coming our way. As we complete evaluations we will continue adding charities that demonstrate transparency and accountability relevant to the cause. 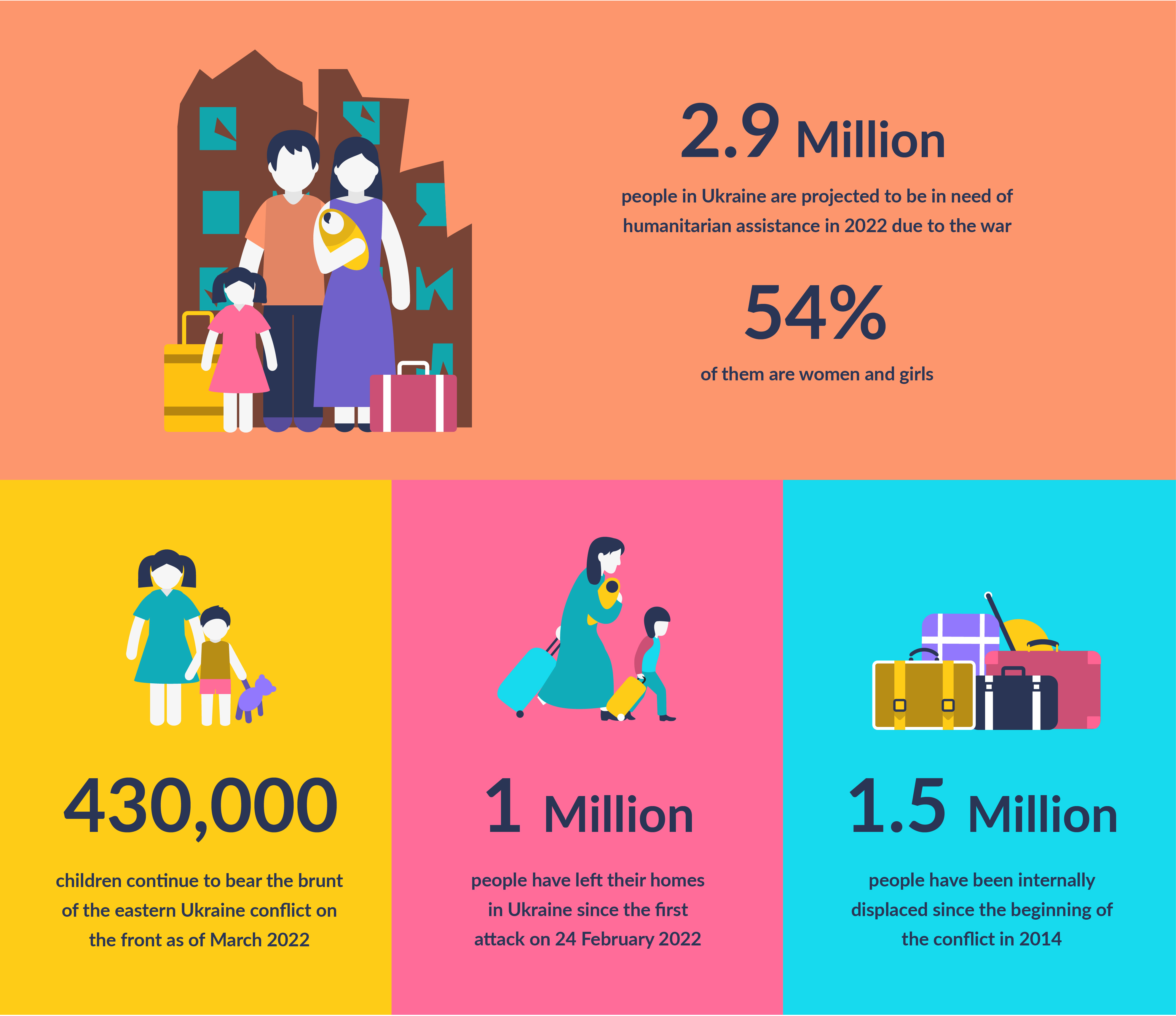 Charities in this United Action

Donate to this United Action to make your money as effective as possible. Our research team rigorously evaluates each charity, and curates collections of the top performing among them, so you can tackle the same urgent problem with different solutions.

We are a Ukrainian human rights public organization which brings together the LGBTQIA+ community.

Insight is a Ukrainian human rights organization that brings together lesbians, gays, bisexuals, transgender people and queers. During the war they continue to do their important work by providing psychological and legal support, medicines, hormones, food, relocation, safe houses for permanent stay etc. SO far they are opening safe houses, setting up medical care, evacuation logistics for LGBTQ+ and women to safer locations, and are connecting people to host organisations within the EU and other countries.

Helping children into education in the world's toughest places!

Street Child NL is committed to ensuring that children can stay safe, even in conflict and crisis environments. Their goal is to ensure that local NGOs helping children in their communities have the resources they need to respond quickly and effectively to changing circumstances. During the Ukraine war, they leverage their networks through the UN Child Protection Clusters to strongly advocate that funds distributed through international organizations be channelled into efforts led by local Ukrainian NGOs.

Tyranny has a witness

Human Rights Watch investigates and reports on abuses happening in all corners of the world and is currently highly active in the Ukraine. They direct our advocacy towards governments, armed groups and businesses, pushing them to change or enforce their laws, policies and practices. In the Ukraine, they are partnering with organizations large and small to protect embattled activists and to help hold violators to account and bring relief to war victims. At the moment, they are also working to verify information circulation on social media, monitoring human rights violations in Ukraine and informing displaced civilians on legal issues and international law and human rights.

Movement On The Ground

MOTG aims to provide impactful and efficient emergency support and lasting aid for communities, both hosting and hosted, to become self-reliant. Their response to the Ukraine conflict has been no different. They have been working with partner organizations to support evacuation efforts of marginalized groups and are providing medical needs to actors inside Ukraine. Based on needs, MOTG will be assisting local partners in Poland, Slovakia, Romania and Moldova and arriving refugees with necessary items, goods and medical needs.

Hands-on Help. We touch the lives of Ukrainian refugees right now, and where it counts.

Netherlands for Ukraine contributes to the prevention of mental scars left by war acts. They strive to help refugees to arrive and support them until they feel safe enough to return to their homeland or become sufficiently settled. They assist Urkainian refugees with advice, transportation, international transit housing, accommodation, basic financial support, and primary social integration.

We make newcomers feel at home in the Netherlands

The Welcome is a user-friendly app that connects organizations, newcomers and locals to ensure refugees a smooth integration into their new society. It functions as one central platform where supply and demand find each other, activities are offered, contacts are made and knowledge is shared. They are currently ensuring that their entire platform is available in Ukrainian and are snureing increased capacities for their helpdesk (topical & linguistic) so that Ukrainian refugees can become integrated and secure as quickly as possible.

For children, against cancer

The Prinses Maxima Center is a center for pediatric oncology. It brings together highly complex care and research for children with cancer in the Netherlands. Adapting to the current situation, the center now offers special care and treatment to Ukrainian child refugees with cancer. They have already coordinated emergency transport to the Netherlands and are now supporting the children and families through organised care, providing accommodation, and ensuring ongoing undisturbed treatments.

In Ukraine, Free Press Unlimited works with three independent media outlets. They are independent media groups in Ukraine that are engaged in independent reporting and investigative journalism. They are currently providing much-needed balanced coverage of the war. Surrounding media partners in neighboring countries are committed to continuing the flow of reliable information by (also) reporting in Russian. Following the Russian invasion, FPU has scaled up thei support and assistance to journalists at risk. They are in close contact with local partners to help in any way possible. During the increasingly escalating situation, they are helping with with safety training, emergency kits, alternative housing and evacuation.

One of NTIs main priorities is the development and promotion of an alternative architecture to nuclear security. A priority that has seeminly reached peak importance. Now more than ever, the world needs a new vision for global security where the risks posed by nuclear weapons and arsenals are understood, reduced, and ultimately eliminated. Through policies and programs, dialogues and cooperative initiatives, NTI works to promote new thinking around nuclear weapons and build the strategies and systems that will allow the world to move beyond an outdated and increasingly dangerous nuclear posture and toward a safer world. The Ukraine is a strong partner on nuclear nonproliferation, nuclear security, and biosecurity issues, and NTI looks forward to continued and intensified partnership with the Ukrainian government and people on these issues at hand.

From vulnerable to decisive: growing together, active together, visible together

Stichting Mano is committed to an inclusive society and work to help isolated and marginalized Rotterdamers to participate in society. With this aim, they ahve an emergency projects which supports Ukrainian refugees arriving in Rotterdam. The support is in form of providing emergency shelter, vouchers for food and supplies, and any further help they might need when integrating into the Netherlands.

In each of the United Actions below, you’ll find curated collections of top-performing charities, all tackling the same urgent problem from different angles.

The Wellbeing of Children in the Netherlands

The Netherlands is a country with a relatively healthy population and a good amount of government health initiatives. Despite this, the Netherlands still faces health challenges, especially among ch

The incredible economic and social benefits of developing equitable and inclusive educational opportunities for women have long been established by countless academics. More than enough studies have

Sustainability means finding a way to meet the needs of the present, without compromising the ability of future generations to meet their own needs. However, since the industrial revolution, excessi

Currently, as a society, we are facing increasingly complex and interconnected challenges, from poverty to inequality of marginalised groups, water scarcity, global political and civil unrest to ris

Newcomer Integration in the Netherlands

People are forced to leave their homes for many reasons— from extreme weather, to political tensions, to economic pressures. Some of these people end up in the Netherlands. Arriving isn’t the end of

There are approx. 476 million Indigenous People spread across 90 countries. These communities face human rights abuses on a daily basis.&nbsp; These include violence, marginalization, forced r